A report from a baking hot Catania.

It was the same set as Glastonbury and so, presumably, all the other festivals they are playing this year.
I liked it. Maybe it was the new experience of seeing Spiritualized in a different country for the first time and, just as at the Big Chill a few years back, hearing them in front of a crowd of largely non-devotees.
Yes, the Oh Baby / Rated X segment did sag. But I think it was the best live version of WWJ I've heard them play.
Funny seeing a rare, split-second display of animation from Jason when one of a number of silver balloons burst in front of the stage: he spun his head round to look at what he maybe thought was a blown monitor.
Also, they did an encore. Take Your Time followed, appropriately, by a sweet low-key first verse of Take Good Care Of It.
It finished on such a quiet note, JP's traditionally barely-audible "Thank you" at the end was the loudest I'd ever heard from him. In my experience of watching Spiritualized, it was the closest he's ever gonna get to "Alriiiight!! You guys rock!! Goodnight Sicily!!"

Elsewhere, we missed FFS (Franz Ferdinand Sparks) on the first night cos we got there too early (4pm ish) and found out that the live music on each day didn't start till about 8pm. And the trek up the never-ending hill of Via Etnea in 35C heat was such a killer that when we ended back in the city centre for food, it just wasn't enough to tempt us back again. (Buses? Yeah, find a bus stop and then wait until it turns up. There is no timetable. Did I mention the 35C heat?)
Anyway, apart from the bands I travelled to Italy to see (Spiritualized, Hookworms, Godspeed You! Black Emperor) there were a few great new discoveries for me.

Ultimate Painting have a real Velvets thing going in, which is never a bad thing really. Also similar to The Feelies. They played about 30 minutes, half of which I really liked.

Saturday was Hookworms day. Their set was pretty special. Not sure if I've seen them do Teen Dreams live before. I used to get frustrated at what I thought was mixing desk problems with the vocals drowned out by the noise. But now I kinda like that. You see MJ screaming away inside this ball of noisy fury, but he can't break out of it. Which seems to elevate the power in the sound.

Before them, there was French act Camp Claude.
Image isn't (or shouldn't be) everything, but it makes for a big chunk of perceptions. Singer Diana bounced on to stage all smiles and positivity, a frizz of blonde hair and wearing a white t-shirt and blue dungaree-shorts. Bananarama, I'll admit to thinking. But they were fabulous. I was completely drawn into the poppy synth-laden Tess Parks style (in the way that Tess Parks sounds like Hope Sandoval). And I miss guitarists using the chorus FX pedal like many of my favourite indie bands did in the 80s (The Cure, The Chameleons).
Camp Claude would suit any festival. (Ok, maybe not Download or Bloodstock.)

'New Discovery Highlight' of the festival for me was, though, Peter Kernel, a Swiss/Canadian trio. I've already raided their Bandcamp vaults.
Like Sonic Youth (specifically (Tunic) Song For Karen by Sonic Youth) with dashes of The Raveonettes. Possibly Courtney Love - but I'm guessing there because I never really heard much Hole.

A late arrival on Sunday meant was only caught Timber Timbre's last half hour or so. I was a bit of a way from the stage and couldn't make out if it was the bloke from The Tindersticks (it wasn't) such was the resemblance in sound. But no, they're from Canada, not Nottingham.

Godspeed You! Black Emperor closed the festival with the kind of hypnotic and overwhelming show of force I'd hoped for.
So much emotion and intensity poured into every musical piece. A mesmerising split-screen backdrop of bleakly ordinary film footage doubled the effect. It was fascinating watch the man operating the four projectors. Like a film-clip DJ, he'd load up one projector, roll the reel back and forth with his fingers, pick up a new clip from a washing line of cuttings and feed that into a different projector.
By the time it all ended, I'm pretty sure I wasn't the only one blown away by it all. 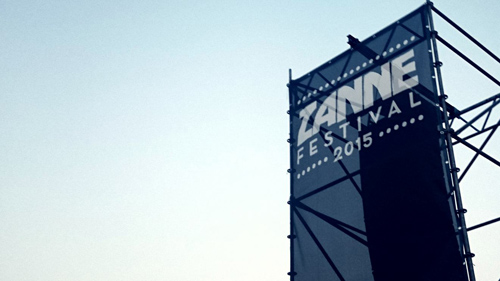 Sounds like you had an awesome time. Looking in wonder at that awesome colour of sky in your photos.
The likes of these kind of festivals in places like this really appeals to me.

Glad you enjoyed Spiritualized, I haven't heard of most of who you seen but the Bananarama looking lead singer of that band sounds amazing!
O P 8
Top

Re: Spiritualized at Zanne Festival, Sicily

Re: Spiritualized at Zanne Festival, Sicily

thanks for the report Starfish. looks like a great festival.

I remembering being impressed by Godspeed's projectionist too. it's like the projector is another instrument.
Top
Post Reply
4 posts • Page 1 of 1