This is where upcoming information on gigs will be posted.

http://shakykneesfestival.com
Here's hoping this means a nice run of US dates in the springtime!
Top

they've added a show for saturday, may 9th at terminal west in atlanta the night before they play the shaky knees festival!
Top

i believe this is the only non-festival date for the year so far.
Top

Any word on these shows?
Top 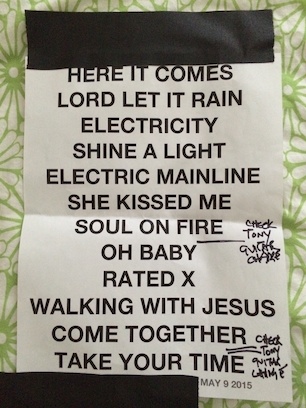 just now getting a chance to come say something about saturday night's show at terminal west. it has been a very busy past few days. i was in north carolina for my brother's graduation and then made the 3 1/2 hour drive back down to atlanta for this show and then turned around after and went straight back to north carolina.

anyway, there was no opener and the band went on after the familiar pure phase tones came on (which were met with some applause by the crowd) a little after 11:30pm. doggen was on his old side of stage right and jason was standing for this show and was back on stage left as he has been for the past couple of shows they've done here in the u.s.
the drummer is still jonny aitken whom i believe joined back up with the band before the november 2013 south american show in chile. i was surprised to see james stelfox on bass (replacing the blonde bass player who i don't know the name of who had played at the february 2014 ladies and gentlemen shows among others) as i had seen him on bass at the may 2012 variety playhouse show in atlanta and got to talk with him a little bit after the show with some other fans at that time. the keyboardist is the same one they've had since november of 2013, i believe, but i do not know his name.

thankfully, i didn't see any evidence of the problems that were mentioned as far as their set at austin psych fest went except for a little bit at the start of the show it seemed like jason's vocals and guitar were turned too far down. this might have been because of where i was standing (on doggen's side) but it got better as things went along. they played for about an hour and 45 minutes and did no encore.
i'm not sure exactly how i feel about the back up singers on "here it comes" as i think i preferred it without them but it's still a beautiful song. everything was technically sounding really good the whole show but i felt like the energy picked up starting with "oh baby" (but then, i really do love this song). "walking with jesus" was probably the best i've ever heard it played live and "come together" had the right super loud drumming at the beginning that just sounds so amazingly good. i should say that even though i am still really partial to the earlier 2013 lineup that included kid millions, jonny's drumming at times has an amazing intensity that is really incredible to watch.

i am really thankful that they played here in atlanta again and i hope that it won't be too long until they come back. i've attached a copy of the setlist that i was lucky enough to get ahold of...i hope it shows up ok.
Last edited by slide_song on Tue Sep 29, 2015 5:48 pm, edited 2 times in total.
Top

Those videos make them sound a million times better than they were at Psych Fest!

That drummer is going crazy in the SKM video - he was quite the opposite the day before!
Top

The drummer's style reminds me of Animal from the Muppet Show. I agree with the other comments on these shows though with regard to it not being a very inspired set list. Hopefully for the European festivals J will mix it up a bit.
Top

toomilk wrote:Those videos make them sound a million times better than they were at Psych Fest!

That drummer is going crazy in the SKM video - he was quite the opposite the day before!

Yeah, I like how Jason has to wave to him to calm down his drumming during the slow build up.
Top

Many thanks for the report, slide_song!
Top
Post Reply
12 posts • Page 1 of 1

Return to “Gigs (Dates Only)”